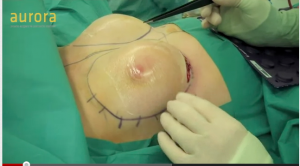 Click here to see it: Removal of Ruptured Left PIP Implant that was Undetected by an MRI Scan.

In the video, Mr Adrian Richards removes PIP implants from a patient who received them at another clinic in 2005.

As well as having been given substandard PIP implants, the patient had received an unsatisfactory result. Her implants were sitting incorrectly as a result of muscle contraction, which was causing the nipples to rotate too far inwards.

When we removed the PIP implants, we discovered that the right implant had gel bleed, while the left implant was completely ruptured. This implant had leaked a creamy fluid into the breast cavity, which had gone completely undetected in an MRI scan.

The area was cleaned out and new high-quality implants were inserted to give the patient a much better result.